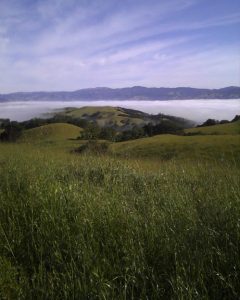 Summertime fog is a major modifier of the climatic condition along the California coast and has significant effects on human and ecological coastal communities.  Marine stratocumulus and fog  alter evapotranspiration rates, provide substantial moisture for coastal plants, modify stream temperatures, and strongly affect the distribution of plants and animals in the San Francisco Bay Area and along the entire coastal Pacific zone. Temporal or spatial alterations in fog distribution will likely be a major driver of landscape change and impact CA water budgets and energy use.

Recent analyses suggest that in the last century fog has declined by 33% along the California coast.  Natural resource managers ask what this means for coastal vegetation such as redwood ecosystems and if this decline is related to climate change.  Maps of future climate conditions in California all show an increase in late summer aridity and it is currently unknown if fog will mitigate this effect and if so, by how much and how evenly. Our current lack of landscape-level fog data handicaps our capacity to plan for the future.  New methods are needed to synthesize observations of the known factors driving fog patterns such as summertime atmospheric inversions, ocean upwelling, synoptic meteorology, topography, aerosol-cloud dynamics, and thermal contrasts between inland and the littoral ocean areas.