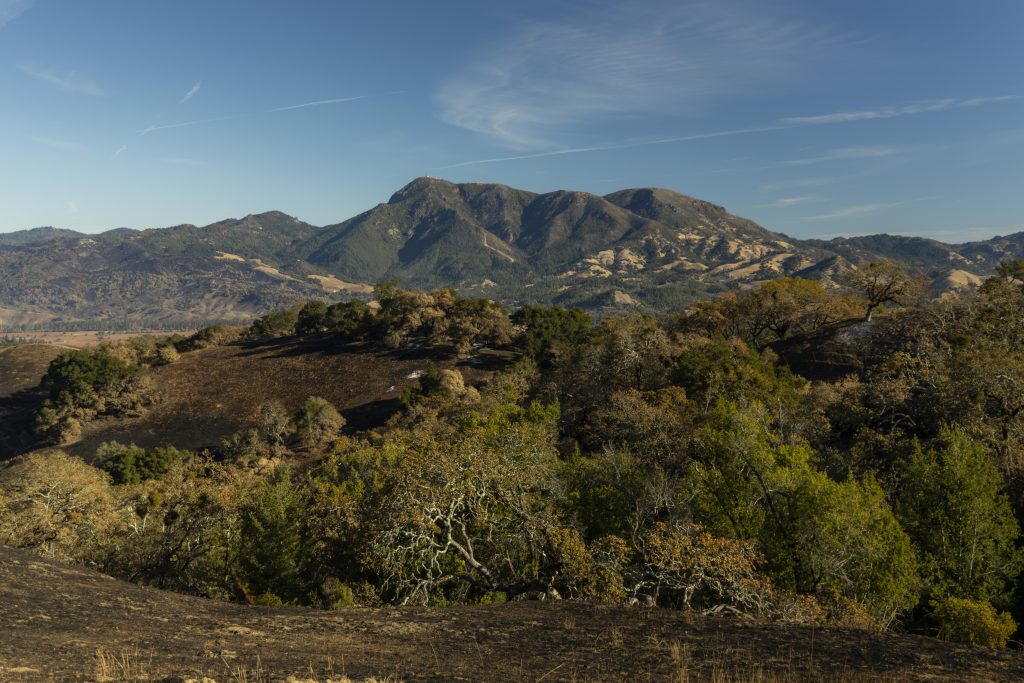 View of Mt. St. Helena from Pepperwood, after the Kincade Fire in 2019. Photo courtesy of Ian A. Nelson

Lisa Micheli is president and CEO of the Pepperwood Preserve, a 3,200-acre science project in Sonoma where scientists study climate, drought and fire. The preserve’s location is fitting if not exactly felicitous; Pepperwood has burned twice since 2017.

Micheli, an expert in hydrology and climate, has turned Pepperwood into a laboratory of regional climate change. “We instrumented the heck out of the preserve,” she said. Pepperwood has 22 weather stations to monitor micro-climates on the site, along with 77 soil sensors at various depths. Altogether, the preserve generates about 350 streams of data.

Pepperwood is a microcosm of an environment under siege. “When you get into fire modeling, you have to basically characterize the landscape condition. There’s two parts of that: There’s the fuel, and there’s the dryness of the fuel. Then there’s the wind. Then there’s the ignition, which is kind of the Russian roulette of the equation,” Micheli explained.

With less moisture in the landscape, fires ignite more readily. With more fuel, they burn faster and hotter. Firefighters speak of wildfire climbing a “ladder,” igniting low-lying brush and then jumping to small trees before ascending a Douglas fir or other tall conifers. The result is a giant wall of advancing flame.

The Tubbs fire of 2017 followed roughly the same path taken by a previous fire, the Hanly, in 1964. But between 1964 and 2017, development expanded dramatically as the wine industry, tourism and residential construction boomed. The differences between the two fires are notable.

The Tubbs was faster, and far more destructive. The Hanly Fire destroyed 108 homes. The Tubbs destroyed 4,651. While there were no fatalities from the Hanly Fire, at least 22 died in the Tubbs Fire.

Even amid drought, most fires are ignited by humans. Yet there is broad consensus that climate change is lending a hand. Long before the serial fires began in wine country, a 2003 report from the American Meteorological Society stated: “Despite pervasive human influence in western fire regimes, it is striking how strongly these data reveal a fire season responding to variations in climate.”

Many who spoke to me in Napa and Sonoma advocated prescribed burns, the practice of intentionally burning target areas. The goal is twofold: to enhance the health of the surrounding forests by clearing out junk growth, and to defend human habitats by eliminating nearby fuel. It’s hard to accomplish this over millions of acres, some of which contain residences. But the practice has a long history.

Researchers have concluded that prescribed burning was practiced for centuries by native tribes in both southern and northern California. “John Muir thought he was looking at a wilderness when he got here,” Micheli said. “He wasn’t. He was looking at a tended garden.”

Europeans banned native burning practices and introduced invasive grasses that are more flammable than native species. “What the eradication of fire does to this landscape, which is a fire-adapted landscape, is it allows the forest to become much denser,” Micheli said. “It allows Douglas fir in particular to invade our oak woodlands and our chaparral. It’s very hard to kill an oak, or redwood, with fire. It’s very easy to kill a Douglas fir with fire.”

A changed landscape is now being worked over by a changing climate. “This sort of hyper-arid, drought-dominated, high-fire regime is completely in line with what we projected,” Micheli said, “and it’s happening where we projected it could happen.” Micheli says climate modelers had envisioned that such an environment might well prevail by the year 2100. They did not, however, expect to be living in it themselves in the year 2020. “We’re looking 2100 in the eyeball right now,” she said.

Enjoying this article? This is just an excerpt. To read the whole article on Bloomberg Opinion, click here.