This is the fourth article in our Fire Ecology for Non-Scientists series. Read the the first on The Fire Triangle & Fire Behavior, the second on Renewal for Pepperwood’s Trees and Shrubs, and the third on Fire Followers. 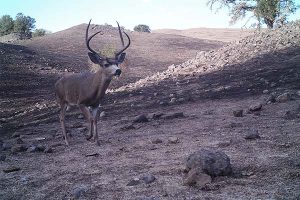 In the Disney classic Bambi, the juvenile deer Bambi is awoken from sleep by his father as an extremely fast-moving and devilish looking wildfire overtakes the forest. The bunnies and squirrels scurry away as Bambi and his father seek refuge in a river. After a perilous ride down a waterfall, they are reunited with the other animals, all of whom seem to have gathered along the edge of the waterway. Is this how animals survive wildfire?

What happened to the animals after the October 2017 wildfires?

After the Tubbs Fire that hit Pepperwood last October, one of the first things people from the community wanted to know was what had happened to the animals. Our Preserve Ecologist Michelle Halbur explains that just three weeks after the fires, when the landscape was still blackened, “pollinators were buzzing us when we were the only colorful objects in the grasslands. We had butterflies and bees—native and European—coming up to us, possibly looking for nectar sources that were no longer available.” She went on to share, “the first small mammal activity we observed after fire was gophers! They were churning the soil and going after underground food caches. On our wildlife camera by the Dwight Center, we captured pictures of a deer within twenty-four hours of the fire, jackrabbits within three days, and even a coyote about a week after the fire.”

How did these resilient animals make it through? Researchers Elizabeth van Mantgem, Jon Keeley, and Marti Witter have studied animal survival during fires that have occurred in California chaparral and sage scrub ecosystems. They describe three ways animals survive. 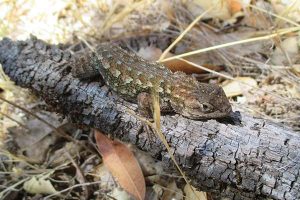 Larger or more mobile animals such as deer flee burning areas and return when conditions are suitable. Evidence of this was seen at Pepperwood. Michelle explains, “from our wildlife cameras, we saw larger animals—such as bobcat—move through the area ahead of the fire, sometimes just an hour before.” Some insects, such as walking sticks (Timema cristinae), are protected from fire because of their adaptations. Certain species of insects, including some walking sticks, undergo diapause—a process where offspring remain in a thick egg stage of their life cycle during the summer and fall, which is then broken by exposure to colder winter temperatures. If they were in their adult form, these spindly insects would have surely died, but as tough eggs insulated underground, they make it through the heat.

After its initial sweep across the landscape, fire alters existing habitat but it can also create new habitat for wildlife. As explained by Cal Fire: “wildlands provide habitat and shelter to forest animals and birds. Fire clears wildlands of heavy brush, leaving room for new grasses, herbs and regenerated shrubs that provide food and habitat for many wildlife species.” But who are the winners and who are the losers? 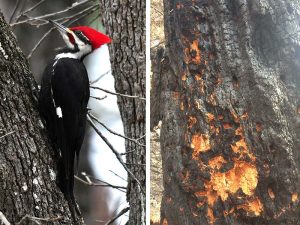 Cavity-nesters may well be some of the biggest winners in the latest fires. These are birds that build nests, lay eggs, and raise their young in cavities and sheltered chambers. Fire creates new cavities in trees, creating new nesting areas.

Many of these birds also prey upon the insects that consume dead tree tissue. Locally, the amount of dead, standing wood has greatly increased since the fires. We anticipate that cavity-nesters, including woodpeckers such as the ostentatious pileated woodpecker (Dryocopus pileatus), may benefit from these potential new dwellings and food stocks. The American Kestrel (Falco sparverius), a beautifully patterned falcon, may also take advantage of these changed conditions.

For the past ten years, Pepperwood has conducted a census of our bird community through our Breeding Bird Survey. Once again, this winter and spring, we will be out surveying our preserve and will share our findings about how the avian community may have shifted at Pepperwood due to the fire.

Researchers Anthony Griffiths and Barry Brook summarized a number of studies that looked at the effects of fire on small mammals—including mice, rats, voles, and squirrels. They found very little evidence of small mammals experiencing direct morality from fire. However, they did find that some small mammals that require thick ground cover for their habitats were less abundant after a fire. This make sense—if the dense detritus was your preferred home and that cover is gone, you may not have a place to make a nest or hide from predators.

Pepperwood’s Michelle Halbur adds, “this is what we observed happening with small mammals initially after the fire. A key point though is that they were still there, just hiding out until the cover came back. They didn’t leave the area, which some people may think will happen. After the grasses greened up about 4-6 weeks after the fire, we saw predatory birds foraging on small rodents that had emerged from underground, protected by the shelter of new grass growth.”

Though larger mammals may temporarily seek new habitat after a fire, over time they seem unaffected. Researchers who studied large fire events that occurred in San Diego County back in 2003 found that mountain lion (Puma concolor), coyote (Canis latrans), bobcat (Lynx rufus), badger (Taxidea taxus), gray fox (Urocyon cinereoargenteus), raccoon (Procyon lotor), and other larger mammal populations all recovered within three years. For most of these species, there was little evidence that numbers had changed from their levels before the fire. Deer numbers may actually increase after a fire, since they have access to more easily available and more nutritious forage. Go Bambi!

At Pepperwood and on neighboring properties, we study the abundance of mammals through motion-activated camera traps. Camera traps provide a non-invasive tool to document wildlife species throughout the landscape. Many of our twenty cameras survived the fire and those that were destroyed have been replaced. Through the analysis of hundreds of thousands of photos captured with this innovative technology, we are documenting the recovery of our animal community and will share this information with all of you. Stay tuned!

Pepperwood wildlife – before, during and after the fire

This is a sequence of images all taken by a single Pepperwood motion-activated camera. Note the time and date stamps in the lower right hand corner, and the temperature readings on the lower left as the fire moves through. 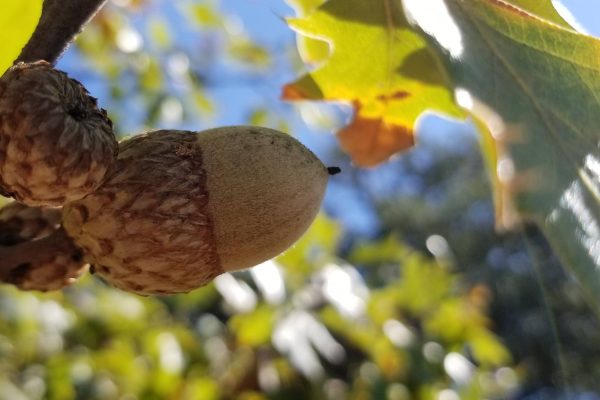