The following is the second in a series of stories written by Sonoma-based author Rebecca Lawton about the experiences of people close to Pepperwood during the North Bay fires that began October 8, 2017. 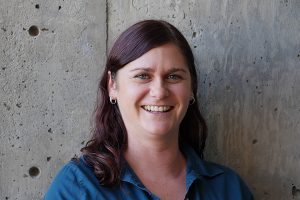 The night of October 8th began as a “pretty typical night,” for Pepperwood Preserve Ecologist Michelle Halbur and her family. “My toddler Rowan had woken from a nightmare around two a.m., and my husband Dave and I’d gotten him settled again. We didn’t even smell smoke at that point.” They all went back to sleep, not knowing that the Tubbs Fire raged just north of their home. Around three a.m., a friend texted that he was evacuating his home west of Coffey Park. At five a.m., another friend came by and made a stunning announcement: “There are fires everywhere!” The Halburs knew then that they’d better check on Dave’s 80-year-old parents.

“Being a scientist,” Michelle says. “I wanted to pull up maps to see what was going on, but we had no Internet or cellular access.” Dave spent Monday morning going from shelter to shelter looking for his parents. “He’d check back home from time to time, and as the day wore on he came back with tears in his eyes. He was starting to realize what must have happened.”

Michelle’s stepfather, Tom, rode his bike toward her inlaws’ neighborhood near Cardinal Newman High School to find out. “The sheriff stopped him,” Michelle says, “so Tom asked him to check on the Halburs. And the sheriff did go find their bodies.”

The devastating news was surreal to Michelle.

“It’s the last thing you expect to happen.” Still she was grateful to have some resolution so early in the week, rather than to spend the next days not knowing. She checked in with other relatives, who were all okay. “Once we’d found out about Dave’s folks, we went to San Francisco to escape the smoke and be with family. Everywhere we went, everyone’s hearts were open, everyone’s hearts were aching, and there was so much love. And that helped the process for us.”

The Halburs spent the next days “experiencing the generosity of the community”. The California Academy of Sciences and the Bay Area Discovery Museum had opened their doors to fire victims. “So we wandered through the science exhibits with our eyes open -and our hair disheveled!” Michelle recalls. “Being with our son Rowan was very helpful. He was a good grounding force. Having a toddler keeps you in the moment.”

Another major grounding force for Michelle was Pepperwood. “Our team was in communication right away with each other. I learned early Monday morning that our Preserve Manager, Michael Gillogly, and his family had gotten off the preserve safely. I wasn’t worried about the land itself, because fire is such a part of this landscape. My concern was for the people. And I realized quickly that the fire in some ways would bring on more work and more opportunity. On one hand, my family had this devastating experience, but on the other, I recognized that in front of me was a thrilling opportunity—a chance of a lifetime, really—to explore what happens before and after a wildfire.”

Since being hired as Preserve Ecologist in 2010, Michelle has been collecting information that now serves as pre-fire data on the landscape. “Most people who research fire effects can only do so after the fact. It’s not often that we have what we call a baseline of data, a foundation of climate, hydrology, and wildlife information from throughout the grasslands and the forests, all across the preserve. Most of our research plots, if not all, burned. So we have this blanket treatment that’s occurred, and now everything going forward is post-fire. We’re not just making assumptions of what was here before the fire. We know what was here—and that is so rare.”

The land is regenerating quickly.

Coast live oaks are already putting out new leaves. “The trees were scorched, and the fire killed the leaves on them, but they’re already bursting forth with spring green. To me, it’s just amazing to witness that.”

Michelle acknowledges that there’s been a lot of talk about how we can plan better and build differently. She’s concerned, however, that “we have very short term memories with fire. Given enough time, people will probably move back in. This is a well-known fire corridor, it’s burned multiple times through history, if not many more times before documented history. We treat earthquake zones and flood zones very differently than we do fire zones, restricting where you can build and expecting consequences if you ignore the restrictions. But we don’t say that about fire. Our relationship to fire is different.”

Michelle’s hope is that, moving forward, we take the lessons of October’s fires to heart. “As our region becomes more arid in the future, the risk and probable frequency of fire will most likely go up. At least that’s what the models are showing at this point. So let’s build smartly. Let’s listen to the science. Let’s talk to each other and really think about where we inhabit versus where we go visit.”

Without nature to turn to, Michelle believes that people might see the recent fires as thoroughly negative. “For me, being able to come up to Pepperwood, and to witness the land responding, gives me hope. It gives me the sense that life goes on, no matter what happens. Finding refuge and peace in nature is so critical. I wish that more people had more access to natural landscapes, and I think that’s such an important part of what Pepperwood does. It helps people maintain that connection.”

Remembering her family’s huge losses in the fire, she says, “We were fortunate the night before the fires, on Sunday, to have visited with them. Looking back, it was a perfect family dinner. We were laughing and playing. We even had the opportunity to talk to my son about the generations in the family. It was really sweet. It was like a perfect evening.”

Michelle and Dave are expecting their second child, especially poignant at this time. That and Michelle’s work at Pepperwood offer lifelines to the future.. “Being up here is extremely healing and grounding and hopeful. We’ve seen deer, coyotes, spiders, newts, and birds. Our grass is already coming back. Our wildflowers are starting to germinate. It was quiet for a while, but as the days go by and rain sprinkles the ground, we’re seeing life emerge.”

“It just shows you how fast we can recover.” 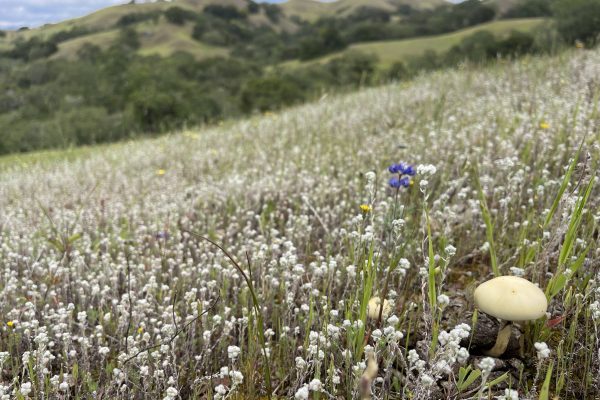 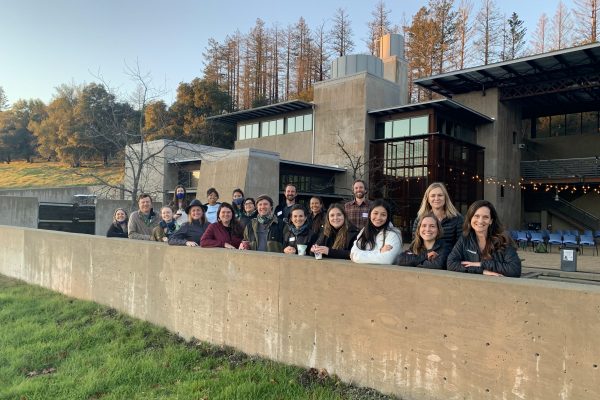